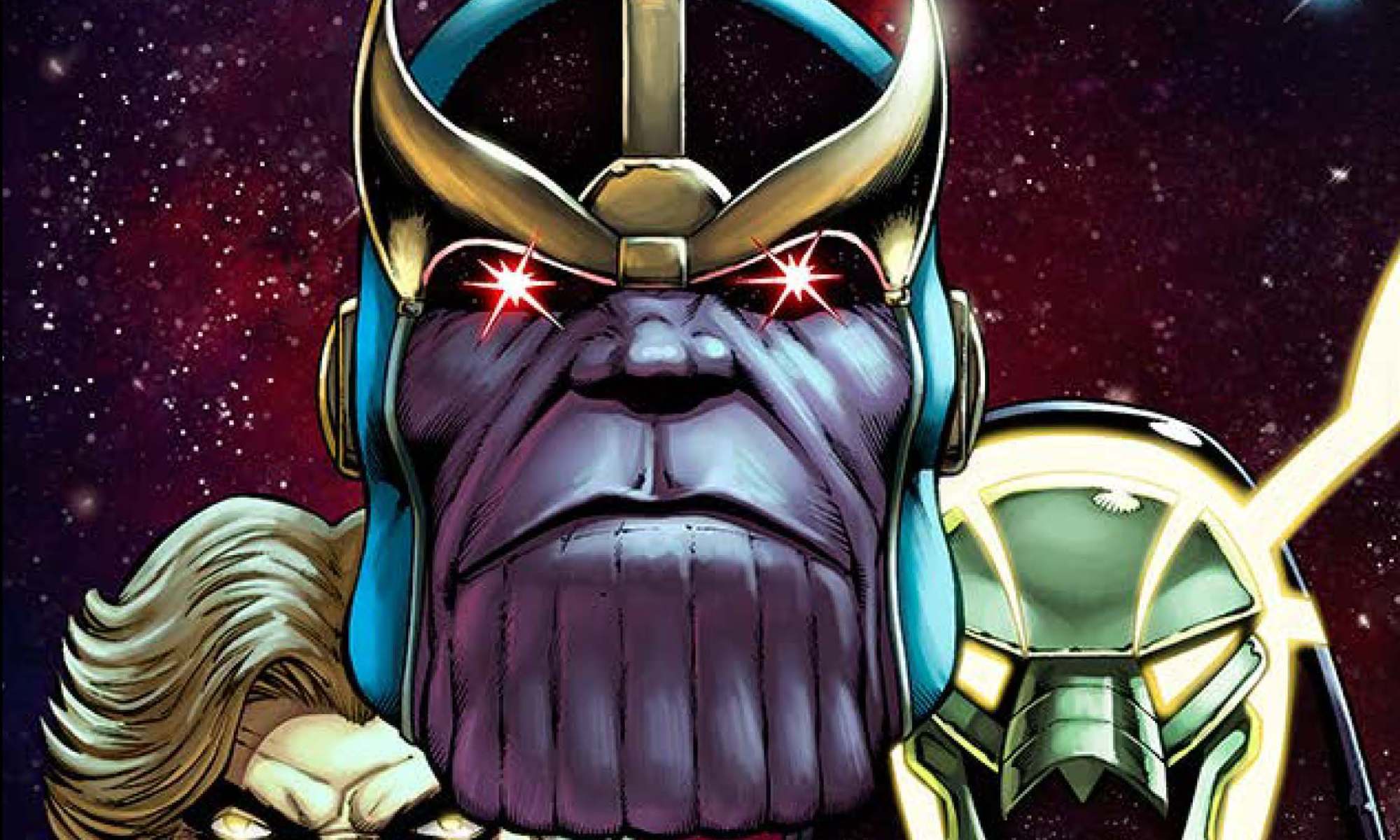 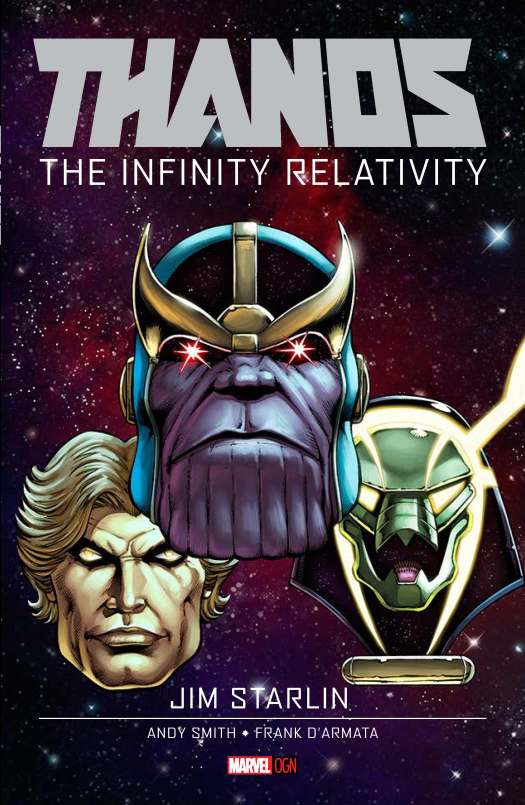 It looks as though Marvel is continuing its bid to add original prose to its list of products. Yesterday, they announced an Ant-Man book. The graphic novel is the follow up to Thanos: The Infinity Revelation and is in Marvel’s OGN line. The book will arrive sometime in June and is written and drawn by Jim Starlin, who also does the cover art. A rare thing in today’s time of interchangeable artists.

Thanos: The Infinity Relativity focuses on Thanos obviously, but also features the Guardians of the Galaxy. The storyline revolves around Adam Warlock‘s death and re-birth (yawn) and Annihilus‘ return to power.

The book will feature a code for the first graphic novel, Thanos: The Infinity Revelation for use on iOS and Android devices and has augmented reality features through the Marvel AR app. It also boasts having “high-end” and “sophisticated” packaging.

Even if you’re getting worn out by the constant use of Thanos, or the contrived and obnoxious uses of the Guardians of the Galaxy, you should pick up the graphic novel because of the talent of Jim Starlin.

On a separate, but related note, sign up for Marvel Unlimited. It’s amazing and I’ve been able to read so many more titles than I would’ve been able to read before. The service of course doesn’t replace having those glossy little paper gems in your hands, but it opens up a wealth of information that was unattainable without thousands of dollars before. Go by Marvel.com and sign-up. You can pay 10 bucks a month, or pay around 60 a year.

Written and drawn by Jim Starlin

Let me ask you this, and darn it someone better start answering me; Are you worn out on Thanos and the Guardians of the Galaxy yet? 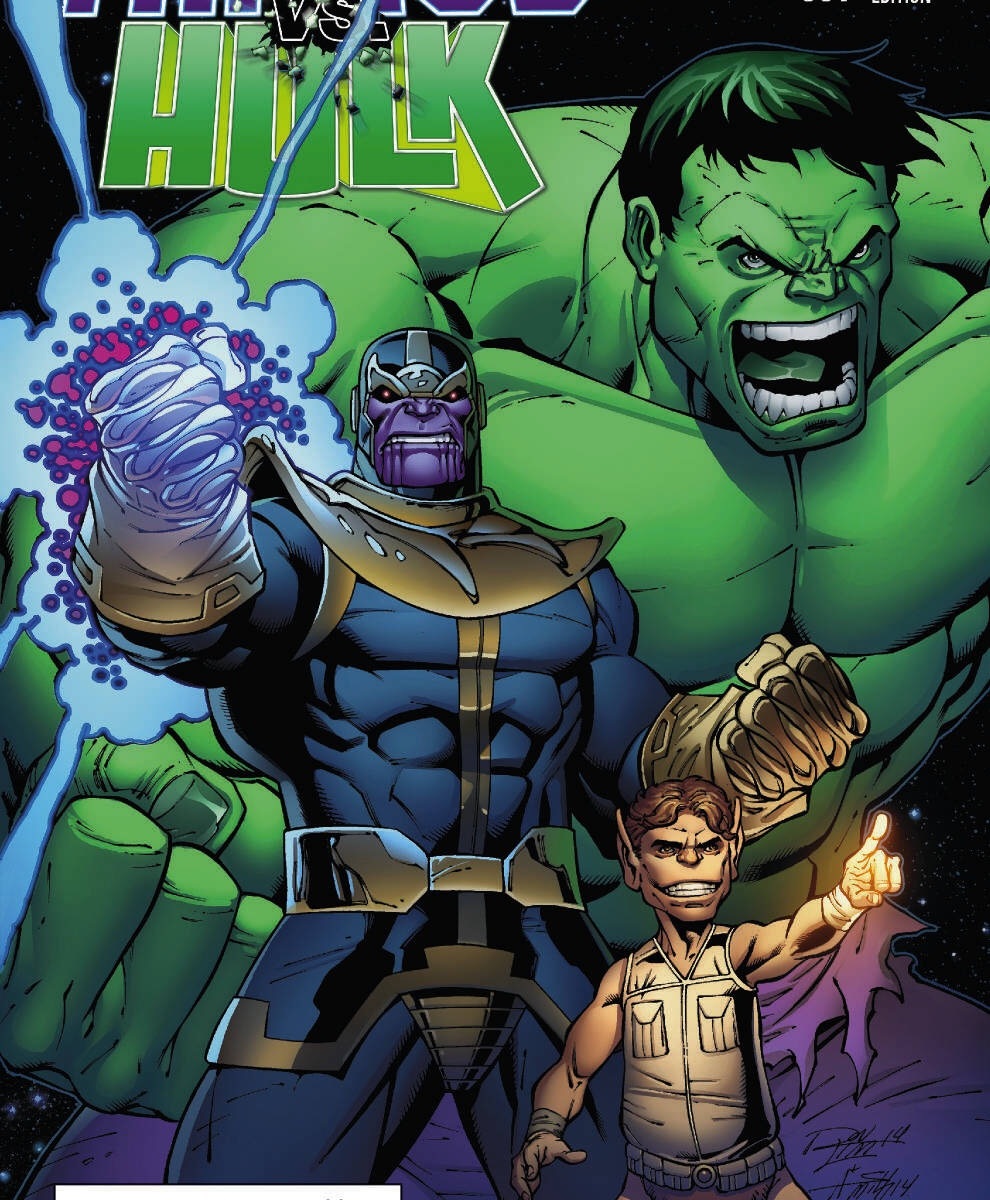 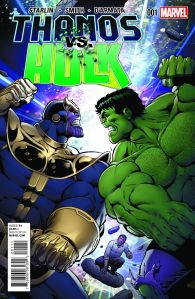 Thanks versus the Hulk

I find myself working my day job testing video games in Seattle, and I ran across this release from Marvel. I thought it was a hokie idea at first, and it may turn out to be. The gist of this mini-series is that Hulk is kidnapped, I think he is sold to Thanos and they punch each other a lot. It’s going to be Marvel at its finest. Just mostly mindless drubbing. The irony is that Thanos is brilliant, and Bruce Banner is one the smartest people in the universe. You would think that they would have better things to do than pound on each other. Have more solutions and creations to make. Who knows, that may be the case.

Keep an eye out for more comic news and reviews. I’ll be reviewing the first three issues or Moon Knight, and Hank is keeping up his DC comic string of articles. Follow us her and spread the world so we can keep it going.

The Heavyweight Battle of the Century – Your New Look at THANOS VS. HULK #1! 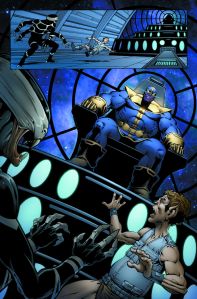 The Green Goliath goes toe-to-toe with the Mad Titan for a universe shaking cosmic throwdown in THANOS VS. HULK #1 – the first issue in a brand new limited series kicking off this December! Legendary creator Jim Starlin (Infinity Gauntlet, Thanos: The Infinity Revelation OGN) returns to answer the question – is Hulk really the strongest there is? Abducted by Pip the Troll and dragged halfway across the galaxy to be ransomed to Annihilus, Hulk is already angry. You wouldn’t like him when he’s angry. But Annihilus has plans of his own – plans that will put the Incredible Hulk directly in the path of Thanos, the Mad Titan! Guest starring Iron Man, Blastarr, S.H.I.E.L.D. and more, be there when Jim Starlin brings two of the Marvel Universe’s heaviest hitters to planet shaking blows in THANOS VS. HULK #1 this December!

To find a comic shop near you, visit http://www.comicshoplocator.com or call 1-888-comicbook.

About Marvel:
Marvel Entertainment, LLC, a wholly-owned subsidiary of The Walt Disney Company, is one of the world’s most prominent character-based entertainment companies, built on a proven library of more than 8,000 characters featured in a variety of media over seventy years. Marvel utilizes its character franchises in entertainment, licensing and publishing. For more information visit http://www.marvel.com © MARVEL 2014 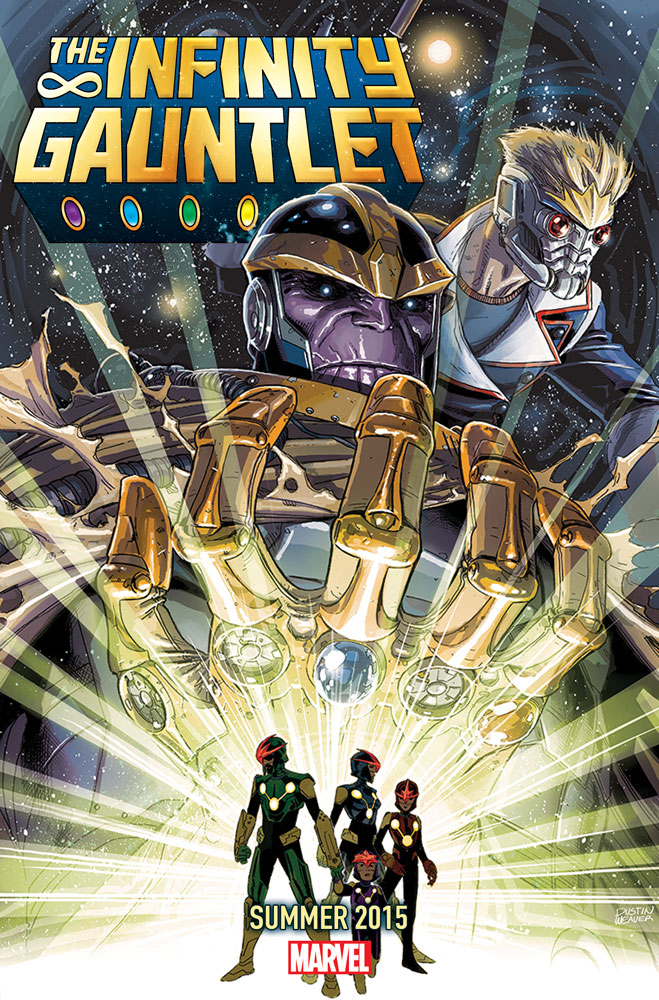 Another unaccompanied Cover from Marvel

After receiving a cover for House of M earlier today with no information, I received this cover art for the Infinity Gauntlet. The Infinity Gauntlet saga features Thanos attempting another takeover of the universe (yawn) and has him assembling all of the gems to create said gauntlet. This series featured one of my favorite creations, Cosmic Spidey.

Have a look at the cover art, and check back here for details on Marvel’s Infinity Gauntlet. For more information visit www.marvel.com